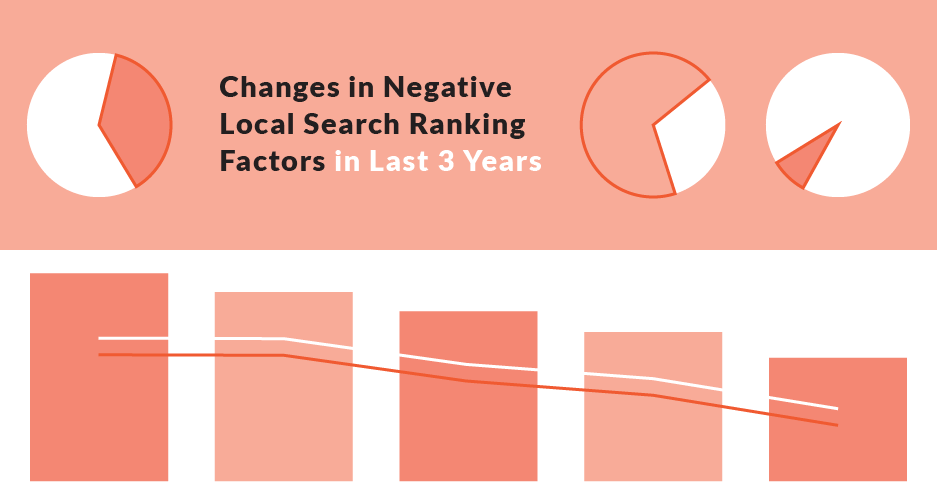 One of the very few things that remained constant about SEO since the earliest days of its development is the frequency with which we are talking about the fact that it never stops changing. We have become so used to this that any kind of consistency is almost surprising, especially when we look at specific areas of Search Engine Optimization. Wanting to take a closer look at the breakdown of negative local search ranking factors that Moz has been publishing as a part of their yearly surveys of experts on the subject, we decided to compare last year’s results with those in the years before. It came as a bit of a surprise to learn that, despite the significant changes in the local search landscape, things that you need to be weary of remained pretty much the same.

Despite the stack changes, Venice and Pigeon updates, the metamorphosis of Google Places to Google My Business and everything else that has happened in the period that we chose to focus on (2013 – late 2015) local search best practices remain largely the same. We won’t mention each of the negative factors that experts deemed most detrimental to success in local SEO, but instead we will give you an overview of the most important ones and point out some general trends. When we do talk about a particular factor we will also mention what position it occupied which year, starting from 2013 and going forward to 2015, with higher positions being reserved for the most harmful ones. 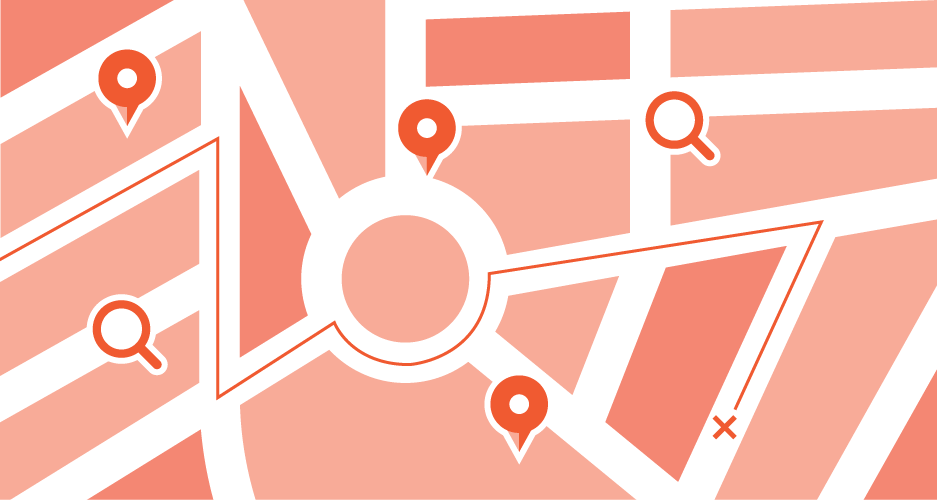 There are several different ways to classify the factors, so we’ll try to provide you with a short summary of some of them.

The first classification of potential problems that we’ll address is based on the area of the data ecosystem they relate to. In other words, those pertaining to the businesses website itself; its Google My Business page (or Google Places for Business in 2013 and up to mid 2014); and third party websites, like reviews, listings in business directories and similar. Moz’s survey analyzed 30 factors in 2013 and 2014 each and 27 in 2015. While the numbers are somewhat rough, as some factors could be classified under two different categories, each year, the most populous group by far was the one dealing with GMB i.e. Google Places. Every year, there were 4 items in the list of potential on-site issues and 18 in the GMB/GP section. In 2013 and 2014 there were 8 potential external problems, while this was reduced to 5 in 2015. 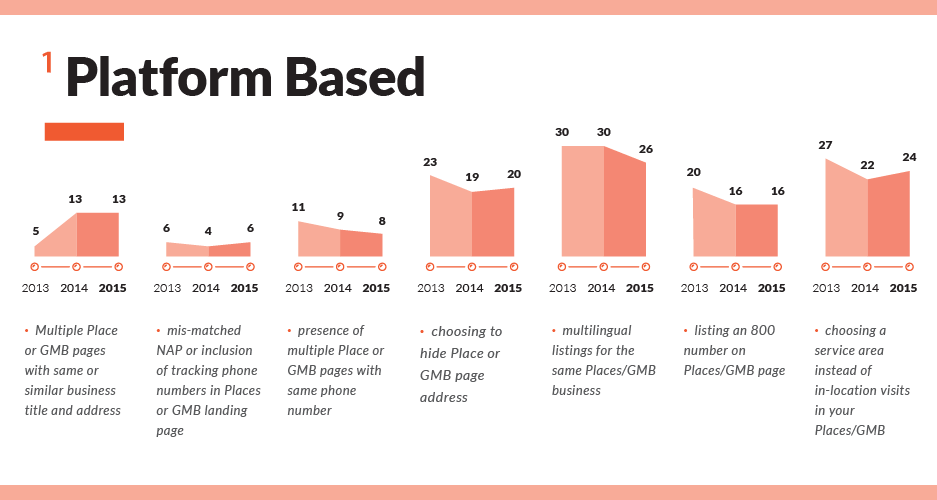 It is hardly surprising that Google managed to make their service quintessential for success in local search, but for those who can’t wait to call them out on it, it must be said that most of the factors that experts believe to have recognized make absolute sense. For the most part, they deal with data accuracy and consistency. For instance, presence of multiple Place or GMB pages with same or similar business title and address has occupied 5th position in the overall list in 2013, and 13th in the years 2014 and 2015. Along the similar lines, experts also listed mis-matched NAP or inclusion of tracking phone numbers in Places or GMB landing page (6, 4, 6); presence of multiple Place or GMB pages with same phone number (11, 9, 8); and choosing to hide Place or GMB page address (23, 19, 20). For the most part, as long as you’re not out to game the system by giving out false information, trying to manipulate the search engines by creating fake listings with incorrect data, or rushing through the setup process, you should ace your GMB page just by following simple common sense.

While most are hardly surprising, there are several items that someone with only a cursory knowledge of optimization for local search might fail to consider were it not for the survey. For instance, even though it is consistently at the bottom of the list, which is to say that it’s not considered a major threat to your local search rankings, having multilingual listings for the same Places/GMB business (30, 30, 26) is apparently still frowned upon by Google, even though it might make perfect sense in some instances. Similarly, it might not be obvious to everyone that listing an 800 number on Places/GMB page (20, 16, 16) or choosing a service area instead of in-location visits in your Places/GMB (27, 22, 24) will get you in Google’s disfavor, but even though these items are relatively low on the list, they still found their way in there.

Outside Vs Inside Influence

One of the more heartening conclusions that we have reached through the analysis of negative factors is that the majority of the problems addressed in the survey is under your direct control. In 2013 and 2014 there were only 4 outside negative influences, while the 2015 survey lists 5 of them, all of them boiling down to user reviews on various platforms: 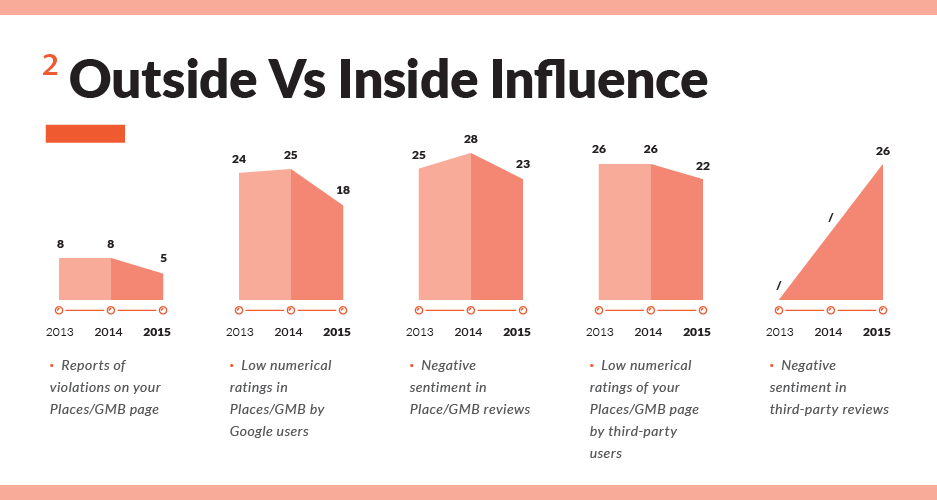 While the numbers indicate that these factors are gaining in importance as time goes by, which is hardly a surprise considering the rising influence of social signals and reliance on actual user input, this still means that a lot of your success in local search will depend on how careful and conscientious you are when creating your GMB page, getting listings on third party websites, and generally, tending to your backyard.

One of the things that has stayed almost perfectly consistent during the three year period that we decided to analyze is the way you set up your business website. Each of the three surveys lists the same four items, with the only difference being their perceived severity: 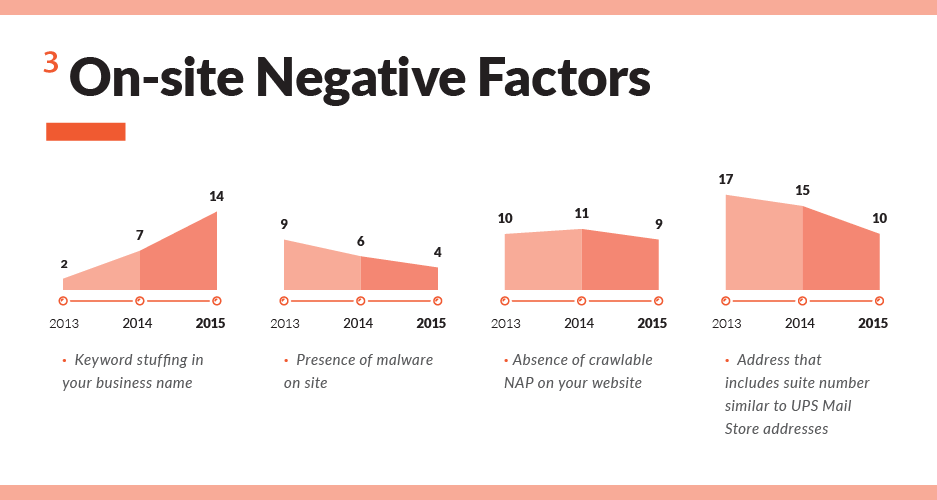 While there are only a handful of factors mentioned in this category, most of them are quite high up on the list, and while the first three might be more than obvious, not everyone would think twice before disregarding the fourth, oblivious to the potential consequences. What might seem surprising is that keyword stuffing seems to be taken less seriously as each year goes by, but that might just stem from the fact that even the most ardent black hatters have had to realize by now the futility of trying to manipulate the results by the age old copy/paste technique. A general decrease in the number of people resorting to this ‘tactic’ could have resulted in its drop in notoriety.

While some of the mentioned factors might not be the first thing you think about when considering potential dangers to your local ranking, most of them are spectacularly unspectacular. The story of optimizing for local search is daily getting new chapters, but its tone remains largely the same. By far the most prominent issue in each survey was NAP inconsistencies, regardless of their origin – GMB, your website, or third party websites. In fact, one of the only items that hasn’t shifted in the period we were tracking is mis-matched NAP or use of tracking phone numbers across the data ecosystem, listed as the third most detrimental factor to your local SEO in all three surveys, in close proximity to other two major offenders – your listing being detected at a false business address (1, 1, 2), and incorrect business category (4, 2, 1). 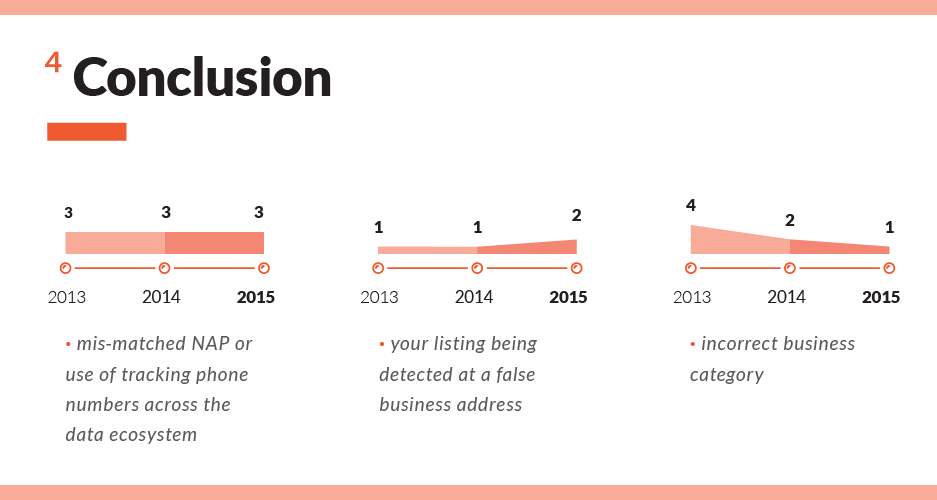 Naturally, simply focusing on negative factors and their changes over the years is far from providing you with the entire picture, but it should at least help you dodge some of the more glaring and easily avoidable issues. As long as you ensure that your site is malware free, that your NAP is consistent and that you don’t indulge in some scampishly devious attempts at manipulation, such as keyword stuffing, crating multiple GMB listings with different data or providing false information, you should have a solid base for upon which to elaborate on your optimization efforts.