John Mueller on Ranking Factors: ‘Search is Not a Science’

In a recent Search Off the Record podcast episode, the Google search team yet again addressed the topic of ranking factors and their significance.

The overall idea that came out of the discussion is that SEOs should stop looking at the search ranking process as an exact science, and that there are no absolute “right” or “wrong” moves when it comes to the ranking of your pages.

John Mueller was accompanied by Google’s Gary Illyes and Martin Splitt, and the trio tackled the issue quite deeply, emphasizing the users’ often wrong and flawed way of seeing ranking factors.

“I think that’s really important to keep in mind in the sense that there is no absolute truth out there with regards to which page should be ranking for which query,” Mueller stated. “So it’s not that every site has to do the same thing, but rather there are multiple ways to get there and you don’t have to blindly follow just one ranking factor to get to the end result.”

His attitude towards Google’s ranking factors can be summed in 2 notions:

Find out more about their insight in this SEJ article.

Facebook is improving its Messenger app by adding a nifty screen sharing feature – which was initially available for its desktop version – to iOS and Android mobile devices.

The screen sharing update will allow users to cast their screen and make it available for other video-chat participants to see, either in one-on-one or in a group video call with up to eight people, but also in Messenger Rooms where 16 users can participate at the same time.

“Today, we’re excited to share that we’re expanding the availability of Messenger’s screen sharing feature in video calls and Messenger Rooms to our mobile apps…

We know people are trying to stay connected more than ever and screen sharing is the latest feature we’re rolling out to bring people closer together.”

You can read their full official announcement here.

Google SEO 101: Is It OK to Block Special Files in Robots.txt?

Another important issue was addressed by Mueller in a recent episode of Ask Google Webmasters. The Google expert tackles an interesting question proposed by a user regarding whether or not blocking special files (including .css and .htacess) in robots.txt is a good idea.

You can read the submitted question below:

Mueller’s response was that, even though no one can stop website owners from disallowing the said file formats, doing so isn’t recommended.

“No. I can’t disallow you from disallowing those files,” Mueller responded. “But that sounds like a bad idea. You mention a few special cases so let’s take a look.”

You can watch the entire episode here:

The main takeaway is: in certain cases, blocking these special files could substantially influence the way Googlebot crawls your website, so you should be careful.

Read more on this topic here.

The social media giant is said to be rolling out “Instagram Reels” next month, a powerful Instagram update that should pose as a direct competitor to TikTok.

Reels, which is scheduled to be launched in August across the US (and subsequently across other 50+ countries), will have numerous features that TikTok already offers its users.

Facebook is likely trying to tap into the TikTok’s market, especially now as the lawmakers are discussing the potential ban on TikTok.

Google, Apple, and Facebook to Roll Out New Updates for World Emoji Day

Whether you like using emojis or not, these little pictographic devices are a significant part of modern communication. This is why the three digital giants have decided to mark the World Emoji Day this year by announcing the release of new emojis, reactions, and emoji options.

Happy #WorldEmojiDay!
An emoji for every mood. Our default sticker pack, “Moodies” got an upgrade with some new animations. #SayItWithStickers pic.twitter.com/FIyzc88j6L

Google, on the other hand, also boasted their new, diversity-friendly set of new emojis.

“Hit that piñata or bang on the long drum to celebrate. Send an anatomical heart when the love is so real, so raw. Or perhaps you’ll identify with one of the new animals, like a super cute bison, an eager beaver or a polar bear that just needs a little love. There are also new food emoji, like a tamale (nom nom), a boba tea sure to make you thirsty (“black milk tea, boba, 30 percent sugar please”) and even a teapot for those who felt the “hot beverage” emoji (☕) was simply not “tea time” enough.”

You can get a more in-depth look at these new reactions and emojis via this SocialMediaToday article.

In an attempt to expand its business appeal and perhaps get more users, Snapchat is introducing a new closed beta version of Brand Profiles.

The feature should provide more options for businesses to connect with Snapchat users and use its substantial user base. 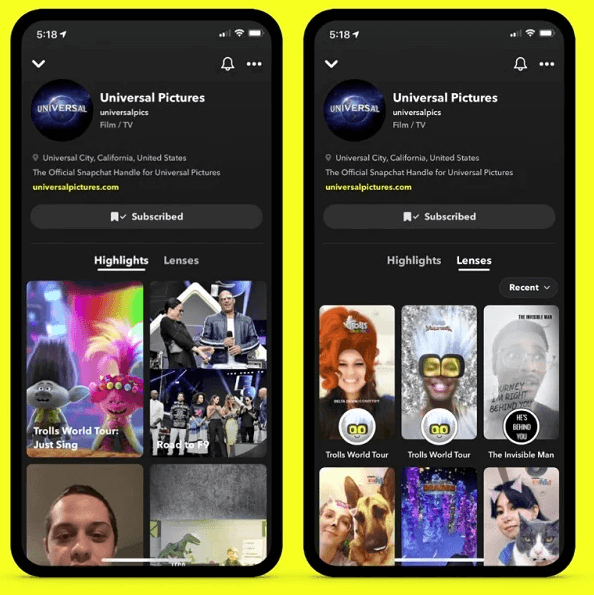 Here’s what the team over at Snapchat has to say:

“Brand Profiles offer a permanent home for brands on Snapchat, [bringing] various brand experiences for Snapchatters together into a single home on our service. With 229 million Snapchatters using the app daily, this real estate for our partners is especially important in a world where our millennial and Gen Z audiences can be hard to reach and build deep, authentic relationships with on many platforms.”

The main idea behind Snapchat’s brand profiles is to encourage more business-oriented users to better utilize the app in terms of marketing, especially as its user-base is quite an opportunity for many brands to acquire new clients.