The last couple of months have been quite turbulent for the creators of TikTok. First, the Indian Government banned it along with all other Chinese apps due to political reasons, then the US President Donald Trump stated that the US ban on TikTok is being considered as a punishment for the COVID-19 pandemic.

It was later clarified by the US Secretary of State Mike Pompeo that the reason for the potential ban stems from Chinese surveillance and propaganda concerns as the app has the potential to be used as a data-gathering tool operated by the Chinese regime. TikTok has then been banned on all military-issued devices across the US, Australia, and the UK due to data tracking.

Microsoft has recently been reported to be considering buying TikTok in an attempt to sever the social media platform from its Chinese parents, and therefore save the app from being banned in the US.

However, late Friday evening, President Trump stated that he would indeed be putting a ban on TokTok in the US, likely within days.

Microsoft, on the other hand, is up for the acquisition. Here’s an excerpt from their official statement:

“Microsoft will move quickly to pursue discussions with TikTok’s parent company, ByteDance, in a matter of weeks, and in any event completing these discussions no later than September 15, 2020. During this process, Microsoft looks forward to continuing dialogue with the United States Government, including with the President.”

Read more about these events in this Social Media Today article.

Google Maps User Can now Create Their Own Profiles

Google Maps is going social by providing its users an opportunity to create their own profiles, follow other users, and therefore submit and consume photos, videos, and reviews in a more organized way.

This is an expansion on a pilot feature that was launched last year. The feature enabled users to select Local Guides and receive their latest updates, which turned out to be very successful causing Google to extend it onto social media like profiles.

“Today we’re expanding this feature and beginning to roll it out globally,” the Google Maps team stated. “If a Google Maps user has shared photos, reviews or lists publicly, you can now follow them and get their recommendations, advice and updates delivered to your Updates tab in Google Maps.

“So the next time you find someone sharing helpful photos of takeout menus, handy lists of your city’s most spacious parks or inspiring photos of local shops and services, you can keep up-to-date on all of their recommendations.”

There will also be topic-based filters through which you can see the locations and businesses that Google Maps users share most often. Photos have short taglines where users can write captions related to the image they uploaded. 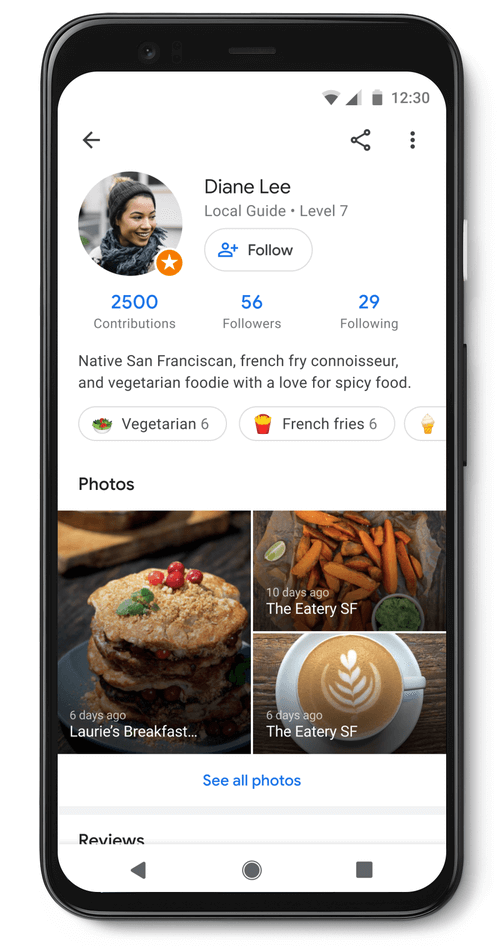 Read more on how to manage your Google Maps profile here.

In an attempt to make ads more transparent, Google will start including more data in its Why this ad? transparency listings. The plan is also to improve data protection measures in Chrome and systematically phase out third-party cookies.

As every Google ad features an ad-specific listing, users can tap on an icon within and be provided with more context in terms of the ad’s advertiser and why he/she is seeing the ad.

“Over the next few months,” says Google, “we’ll be making improvements to the experience with a new feature called About this ad, which will also show users the verified name of the advertiser behind each ad. About this ad will initially be available for display ads purchased through Google Ads and Display & Video 360, and we’ll bring it to other ad surfaces throughout 2021.”

This way Google is giving more context and more transparent data to users, but also an easier way to control their ad data and which ads they will be targeted for.

As for blocking third-party cookies in Chrome, the company is introducing Trust Tokens as an alternative to tracking users across the web.

These tokens are used to authenticate users without needing to know who they are. They can not be used to track users across the web, but can still let websites prove to advertisers that the action performed was done bu an actual user, not a bot.

These new options that control what data Google collects should help advertisers comply with privacy requirements from laws and regulations including the EU’s GDPR and the California Consumer Privacy Act.

Google’s AMP testing tool has been updated so it can now be used to test whether or not a website has a valid Web Story format, which should be very handy for troubleshooting site issues.

Both types of AMP URLs – AMP and Web Story – are accepted via input, thus eliminating the need for a standalone Web Story validation tool.

Web Story belongs to the family of Accelerated Mobile Pages (AMP) and its purpose is to allow page visitors to quickly consume content. This is also called snackable content, a name dubbed by Google itself.

Also, a WordPress plugin for creating this type of content is currently available, but it is still in its beta version which means users can expect certain flaws in the plugin’s functionality.

WhatsApp is rolling out a handy new feature that should help users quickly fact-check the contents of viral messages. The idea behind this search feature is to fight misinformation that is now more widespread than ever.

WhatsApp users can now see an icon in the shape of a magnifying glass next to the messages that have been forwarded through a chain of five or more people. If a user taps on the icon, the app will start a search for the contents online. 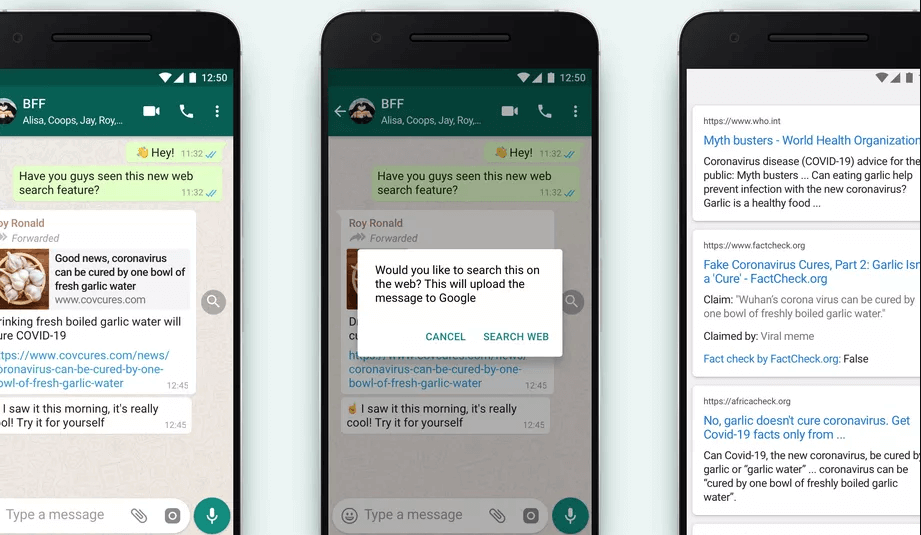 In the screenshot above, you can see an example of a viral message claiming that the COVID-19 virus can be cured by consuming freshly boiled garlic water. By tapping onto the icon and searching the web, three websites pop up debunking these claims.

The new WhatsApp search feature is currently available for both iOS and Android users, while its web version is available in the US, UK, Brazil, Italy, Ireland, Mexico, and Spain.