The idea is to have a single tool the users can utilize to manage their Facebook and Instagram accounts and boost their social media presence more easily.

Facebook Business Suite will be available for both desktop and mobile devices and will enable FB and IG users to:

You can find out more about this tool in Facebook’s official post.

The US TikTok Ban Delayed For a Week

US-based TikTok users will be able to use this social media platform for at least another week. Namely, after the conditional approval of an acquisition deal with Oracle and Microsoft took place, the TikTok’s US ban has been halted due to the recent progress in a deal with Oracle and Walmart.

Though President Trump has recently signed an executive order for TikTok to be banned in the US on September the 20th, this date has been postponed as there has been a new concept-based breakthrough with this deal concerning the two US companies taking control of the platform.

According to SEJ, ByteDance Ltd. wants a $60 billion validation, while Oracle eyes a 12.5% share. Walmart has already agreed to buy a 7.5% share, which means that Oracle and Walmart are about to pay a combined sum of $12 billion.

A new company will be formed for these purposes – TikTok Global.

In a recent Ask Google Webmasters video, Google’s John Mueller talked about whether or not putting keywords in a domain name can help a website rank for that keyword, and the answer is no.

Mueller addressed the matter as one user posted a specific question regarding keywords in top-level domains:

“Does a .jobs domain improve ranking in Google for jobs?”

Google’s expert responded by addressing both putting keywords in TLDs and placing them in domains in general:

“This is a really common question that comes up for the new top-level domains. In short, no. You don’t get a special bonus like that from having a keyword in your top-level domain. Anecdotally you can see that by searching naturally for anything that interests you.

I’d venture a guess that the top results don’t have those keywords as a domain ending. Often it’s not even in the URL at all. That’s by design.”

Mueller also said that SEOs don’t have to put their keywords in a domain name as it simply won’t affect their ranking for that particular keyword.

“Just because a website has a keyword in its domain name”, says Mueller, “doesn’t mean that it’s more relevant than others for that keyword. In short, you don’t need to put keywords in the domain name.”

If you have been in the SEO industry for a while, you are probably surprised by this claim as it contradicts certain studies regarding Google ranking factors.

What is your experience with keywords in domain names and rankings? More info on this available in this SEJ article.

As of November 2020, GoogleBot will start crawling certain websites over HTTP/2 – the next major revision of HTTP with improved architecture. The company has recently announced and confirmed this major update.

The upgraded architecture of HTTP/2 is:

It will also improve features and add new ones for clients and servers.

🤓 Googlebot is learning a new HTTP dialect! 🤓
Starting mid November you may see some of the Googlebot crawl to happen over HTTP2 🙌

The company claims that the main idea behind the update is to make the crawling process more efficient in terms of resource and server usage:

Visit this SEJ article to read more about how HTTP/2 crawls websites. 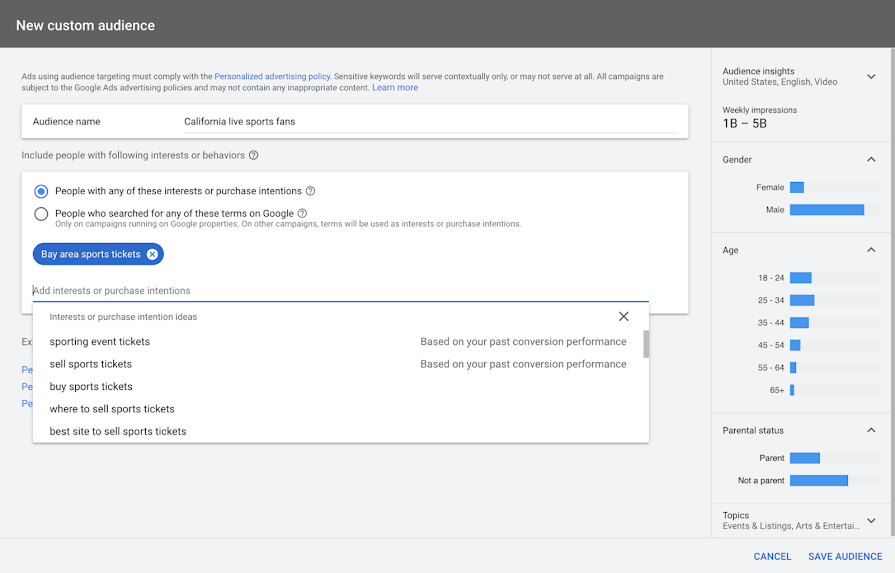 The option can be set up in the Audiences section at the Campaign/Ad Group level, as well as via the Audience Manager section in your Google Ads account.

Google chooses the right audience based on how you set up your campaign goals, along with your bidding strategy. The campaign priorities can be reach, performance, or consideration, based on which Google then optimizes audience choices.

Go to this informative SEJ article to gain more insight into how these audience targeting settings work and how to optimize them.