Hello and welcome to another installment of Digital Marketing Week in Review by Four Dots. This is the first edition of our weekly review for 2020 and we are glad we have a chance to continue our work and keep you up to date with the most important and exciting topics and events that took place during the last seven days in the world of digital marketing.

For our January 2020 week 3 edition, we have prepared some of the most relevant stories from the digital marketing industry.

Here’s what we have prepared for you this week:

…and more. Let’s get started!

This broad core update will impact all search results worldwide. The January Core update is not targeting something specific that site owners can improve. Therefore, Google’s guidance regarding this update is the same as the previous core updates.

Some pages will drop in rankings, while others will thrive. However, this doesn’t mean that there’s something wrong with pages with dropped rankings after the core update. These pages are just being compared with the content that has been published since the last update. Naturally, if the new content is better, it will be ranked higher. This, of course, doesn’t mean that the older content is bad.

Changes will be noticeable and drops or gains in search rankings will definitely occur, so we recommend paying close attention to your rankings in the upcoming days and weeks.

DuckDuckGo is a search engine that will soon be offered to Android users in the EU. What’s interesting is that this will be a default search engine option on Android devices.

The option to choose a default search was always available on Android devices, but users had to search for it in the settings menu.

As you probably know, Google tried to set itself as the default search provider on its own operating system before and it was ruled illegal under EU antitrust rules. This is why they had to pay a $5 billion fine. To avoid fines like these, Google has to change its practices and allow users to choose their own default search engine when setting up a European Android device that has the Google Search app.

As it seems, DuckDuckGo was one of the highest bidders, since it’s being offered as a choice in all countries in the EU.

So, when Android users in the EU boot up a new device they will see three Google alternatives and they will be able to choose any of those three as their default search engine. DuckDuckGo will be the most recommended option in all EU countries. Bing will only be an option in the United Kingdom. 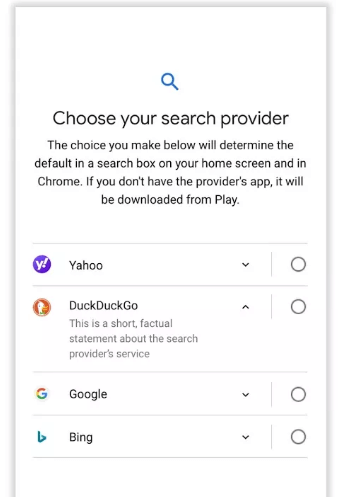 The company is urging devs and publishers to read Google’s push notification best practices in order to obviate any problems with the blocking of notifications.

According to folks over at Search Engine Journal, there are two different scenarios in which Google Chrome will block push notifications:

Google announced that there will be certain penalties for websites that utilize push notification for ad, malware, or other deceptive delivery purposes, though these penalties are yet to be addressed.

The push notification blocking feature will become effective on February 4th when Chrome 80 is scheduled to be released.

Google Weighs In On Best Practices For Headings Usage SEO-Wise

Back in the early 2000s, headings (H1, H2, H3) were important ranking factors. So, if content creators wanted their content to rank better, they simply had to add keywords in the headings.

Naturally, this is not the case anymore.

Adding keywords to headings tags is done only because it’s a habit. This practice is not useful anymore.

John Mueller from Google says that the headings are overrated and that some website owners pay too much attention to headings. He also explains how headings should be used.

“I think in general, headings are a bit overrated in the sense that it’s very easy to… get pulled into lots of theoretical discussions on what the optimal headings should be.”

John Mueller says Google reads headings in the way they were originally meant to be – for understanding what the paragraphs that follow the heading are about.

“We do use headings when it comes to search. But we use them to better understand the content on the pages”, says John.

Custom dimensions provide you with the opportunity to append annotations to your campaigns and keep track of your categories and subcategories aligned with your business structure and goals.

Therefore, if you are using labels, extensive campaign naming taxonomies, custom dimensions can help you to achieve this type of reporting in an easy and simple manner. Custom dimensions are designed to apply to all of your campaigns and stay consistent for some time.

Facebook announced a new feature that will allow users to choose whether or not a certain advertiser can show them ads using a Custom Audience list.

Here’s what they wrote:

“People have always been able to hide all ads from a specific advertiser in their Ad Preferences or directly in an ad. But now they will be able to stop seeing ads based on an advertiser’s Custom Audience from a list.”

Even though this kind of control might seem bad for advertisers, it could, in fact, help them improve their marketing campaigns. If users have the option to choose which ads they see, marketers have better insight into what kind of messages they should send to their customers.

From January 6, companies are not allowed to collect data from children under the age of 13, due to the Children’s Online Privacy Protection Act (COPPA).

This means that targeted ads will no longer be served alongside videos meant for kids. Targeted ads require data collection and, as we said, collecting data from boys and girls under 13 is prohibited since last week.

From now on, YouTube will treat personal data from a user watching content for children as coming from a child, regardless of the actual age of the viewer. This means channels publishing kids’ content will only be able to promote non-targeted ads.

“According to the FTC, a video is made for kids if it is intended for kids, taking into consideration a variety of factors. These factors include the subject matter of the video, whether the video has an emphasis on kids’ characters, themes, toys or games, and more.”

Channels specializing in this kind of content can set this designation in the channel settings. YouTube will also use machine learning to automatically identify which videos are made for kids.

However, a lot of YouTubers are concerned their content will be identified as children’s content by mistake, which would prevent them from serving targeted ads. Luckily, YouTube has a solution. If YouTube incorrectly identifies that a video is made for kids, the creator can override the decision. In this case, YouTube will not penalize the creator unless abuse is detected.

Channels that make content for kids have not completely lost their ability to serve ads to their viewers. They can still serve non-targeted ads, but the lack of targeting might cause them to lose money.

Will this change hurt the creators? We will know once there’s enough data to compare targeted versus non-targeted ad revenue.

That’s it for this week’s edition of Digital Marketing Week in Review by Four Dots. See you next week, but in the meantime check out our previous end-of-the-year installment, in cases you’ve missed it.