Welcome to another episode of Digital Marketing Week in Review by Four Dots, our weekly category where we go over some of the most interesting industry-related events and topics that took place over the last seven days or so.

In our February 2020 Week 2 edition, you can read about the following events:

The social media giant, Instagram, is about to introduce a brand new feature that will allow its users to sort the people they follow according to different categories. The new feature is dubbed “Following Categories” and it allows you to group the profiles you are following into 3 different types: 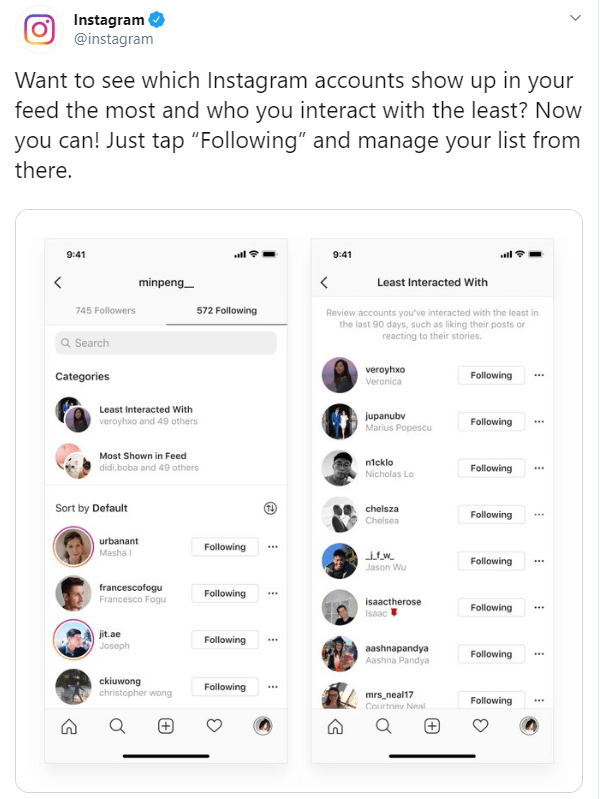 By introducing this kind of compartmentalization of your feed, Instagram users will now have the chance to tailor the content they see according to what they deem relevant. The data Instagram uses to create these categories goes back 90 days during which it calculates interactions and measures user actions – including metrics like story reactions and post likes.

To learn how this may impact the world of digital marketing, check out this Search Engine Journal article.

Finally, someone recognized that user experience and reputation is a bit more important than the buck earned via ever-intrusive mid-roll ads.

Namely, Google Chrome announced its built-in ad blocker will start blocking “annoying” and “intrusive” ads that remove any joy from watching videos online. This refers to those ads that run before and during videos.

This presumably comes after a survey that has been conducted among users around the globe and included 45,000 consumers. The data from this research indicates that people see certain ads as disruptive (mind you, for video shorter than 8 minutes), and these 3 ad experiences involve:

Admittedly, the aforementioned changes will only affect the videos shorter than 8 minutes, which means those longer ones will still be able to implement any type of pre-roll or mid-roll ads.

We all suspected YouTube is heavy, but we never knew it was this heavy.

Google recently revealed that YouTube generated $15 billion over the course of the last 12 months. This makes roughly 10% of all Google 2019 revenue. Alphabet, Google’s parent company, also announced the company’s overall revenue was $46 billion in the quarter that ended on December 31st, 2019, which is a boost of 17% when compared to the same period during 2018. This makes for a profit of nearly $10.7 billion of those $46 billion, according to the report.

More info on these numbers available in this The Verge article.

Good news for digital marketers who seek new platforms to promote their or their client’s content. TikTok, the new and rising short-form video app, now offers its users an option to post videos via the TikTok desktop version. 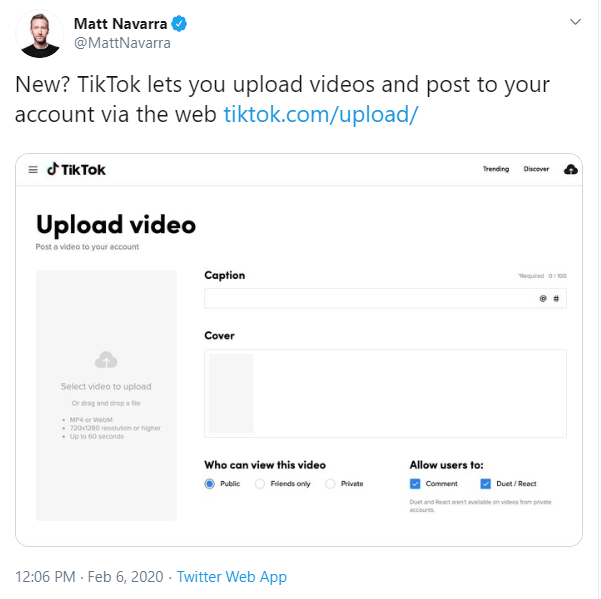 This will be especially handy for social media managers who manage numerous accounts and prefer doing so from a single device. The new option will also make room for uploading content that is better tailored, polished and edited according to brand needs.

You can read more about the new TikTok upload option here.

Avast has recently announced they are shutting down Jumpshot, a company that has been providing potent data “from within the Internet’s most valuable walled gardens”. This decision comes after the way this company shared and sold information was deemed questionable.

Due to the nature of the SEO niche, numerous agencies and companies that deployed the data coming from Jumpshot were SEO tool providers who – somewhat expectedly – moved and sold this data to various SEOs for keyword research purposes, among many others.

Here’s a quote from a press release that was recently published by Avast:

“The bottom line is that any practices that jeopardize user trust are unacceptable to Avast. We are vigilant about our users’ privacy, and we took quick action to begin winding down Jumpshot’s operations after it became evident that some users questioned the alignment of data provision to Jumpshot with our mission and principles that define us as a Company”.

According to Avast, users’ personal information including names, email addresses or contact details haven’t been shared or sold.

Further reading about the controversial Jumpshot shut down and how it may affect (read: harm) the web and the world via this Sparktoro article.

Google’s team over at Google Search Console is trying to help digital marketers by adding review snippets. The new performance features will bring more value to this already quite useful type of structured data.

The new GSC features include:

This can be especially handy for the website owners who implement reviews on their webpages as it provides insight into how well certain pages are performing in the Performance report.

That’s it for this installment of Digital Marketing Week in Review by Four Dots. See you next week, until then, feel free to check out our previous edition!