You’ve probably heard about terms “white hat” and “black hat” in SEO. This article is meant to give you a clearer picture of what they mean and what exactly they can provide you with. Basically, black hat refers to practices which are not acceptable by search engines, and are sometimes unethical, or even illegal, while white hat stands for any action that you can take to increase your rankings and raise the visibility of your website in search engines, without deviating from the webmaster guidelines prescribed by some search engines, most notably Google. We have decided to give you an overview of the most common practices employed in both of these approaches, along with their possible benefits and risks. 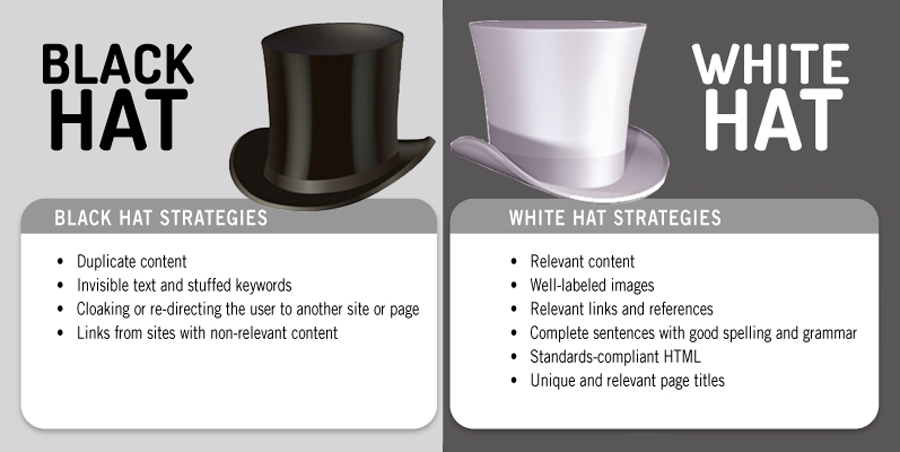 Regardless of what they might say about it, a lot of SEOs have at one point dealt with black hat. For a lot of them this marked their entry into this discipline, as it is (or at least, it used to be) a faster and easier way to boost website’s rankings, and despite its faults, it can teach you a lot about SEO.

Most common black hat practices are:

Cloaking – This term describes any type of displaying different content to crawlers than the one that users are able to see. For instance having white text on a white background, or displaying one page to visitors and another one to crawlers.

Keyword stuffing – This refers to any kind of stuffing the content or metadata of a page with keywords you want to rank for. It is one of the main reasons people resorted to cloaking, as it allowed you to have as many keywords on a page as you want to, without the users having to see them.

Site scraping – An automated process in which a website automatically “scrapes” other websites for the content to publish as their own. This allowed for frequent content updates with absolutely no effort.

Link buying – People used to make sites known as “link farms” the only purpose of which was to sell link space. More often than not, those farms were united into networks, which was supposed to increase the value of links they hold by passing on more link juice.

Article spinning – A common practice on sites known as “content farms”, article spinning involved making minimal changes to a piece of content, just enough to make it different enough when a crawler is concerned. This usually resulted in a very poorly written piece of content that offered no real value and was quite difficult to read, as most people used automated means of changing the text where some words were replaced with their synonyms, even within set phrases, which, naturally, resulted in complete gibberish.

These are just some of the more common black hat techniques, but people also resorted to hacking other people’s websites, different redirections and even negative SEO in order to boost their rankings. However, even though black hat approach used to be quite effective for quick boosts, the constant improvement of search algorithms made most of these techniques completely worthless, and those that still do have some effect are becoming more risky by the day. Even though, some SEOs were willing to have a well ranked website for a while, completely aware of the fact that it won’t last too long, as it usually helped them earn enough money to justify the effort. Despite the fact that Panda, Penguin, and numerous other minor or major updates to search algorithm have made most of these techniques worthless, there are still cracks that skillful black hat SEOs can exploit, but the results never last for too long, and sooner or later they find themselves in Google Hell.

White hat basically stands for doing things the right way, and actually earning better rankings. Most people dealing in this kind of optimization are frustrated by the fact that some people have prejudices against SEO, only because they mostly came into contact with spammy, unethical black hat techniques. White hat SEO efforts are actually supported by search engines, with their representatives often giving advice on how you can ethically help your site rank better.

Among other things, white hat refers to:

Extensive keyword research – SEOs try and determine the keywords you should target for the best conversion, find out what the competition is like and try to differentiate between realistic, achievable goals and wishful thinking.
Onsite optimization – This includes everything from getting your metadata in order and creating a good inner linking structure to providing a good XML sitemap that will make it easier for crawlers to index your content.

Link building – this term is sometimes associated with black hat, but in this instance it refers to the promotion of your websites on other, relevant sites the visitors of which can actually benefit from having a link to your site. This means that you have useful content or resources that can actually help people, and all that you are doing is promoting it in as many places as you can.

White hat SEO is much more demanding than black hat when it comes to both time and resources, but the effect it produces will stay with you forever. Naturally, your rankings might drop to some extent in time, but you will never lose good site architecture, valuable, relevant links and a solid base for all future SEO endeavors.

Google is doing its best to encourage white hat and eradicate black hat, and even though there are still a lot of possible exploits, dealing in black hat is getting riskier by the day. An astounding number of websites that had numerous suspicious links have been penalized and deindexed, as were those that resorted to cloaking, keyword stuffing, content scraping and other, now completely useless black hat techniques. Even though you might stumble upon a new way to trick Google, you can be sure that sooner or later, this too will be addressed by the algorithm update and that you will find yourself left out of SERPs.