Think about the people you see around you every day. How many of them have smartphones and how much time they spend with them.

Numbers are telling us that almost half of the world’s population is actively using internet in one way or another. Out of all of them, half access the internet via their mobile devices. The number is even higher in the U.S. where 75% of users prefer surfing on their handheld devices. With such state of affairs it is no wonder that Google, the world’s biggest search engine, has put an emphasis on websites that are responsive.

What does this mean for you, your website and your business?

In short, it can create a difference between a customer and a passer-by. However, the story goes well beyond that…

Recent research conducted by BuzzBoard showed that even though Google’s Mobilegeddon has been wreaking havoc on unresponsive websites since April 21st 2015, still 47.3% of all small business websites are not mobile-ready. Some researches even go as far as to claim that only 33% of SMBs have mobile-ready websites. Regardless of which research is more accurate, they both point out the same devastating facts: half or more SMB websites are in danger of being left behind.

Mobile-ready, or responsive website, is a website which bolsters content that scales with different screen sizes. For example, if you change viewports from desktop’s 24” fHD screen to, let’s say, a 1280 by 720, 5” mobile screen, you will get a bit different form of content, but the same user experience. Unresponsive sites have content which doesn’t scale and looks terrible on mobile devices, thus increasing bounce rate drastically. That is something that Google noticed as well and has updated its search algorithm in such a way that it places mobile-ready sites in far superior positions. Think of it like this: you might be missing out on some serious money, given that in 2015 alone, B2C e-commerce sales have gone past $1.5 trillion, while mobile influencing retail sales accounted for 1 trillion.

Having a responsive website is not all there is to ranking well in mobile search engine results. There are numerous other factors impacting a website’s position and their number is constantly changing. One of the factors that became an important part of Google’s search algorithm is page speed.

The fact that page speed does and will impact rankings is not based on some kind of predictions, but rather on Google’s latest activity in the field. They’ve launched an initiative called Google AMP project. AMP, which stands for Accelerated Mobile Pages, is an open source project which is not only ran by Google, but also backed by many media giants and tech companies.

Google isn’t the only one running a project that improves page loading speeds – Facebook is working on its own version of a solution for a faster web as well – Instant Articles. They are pretty open about what the initiative is all about, stating: “We built Instant Articles to solve a specific problem — slow loading times on the mobile web created a problematic experience for people reading news on their phones.”

Nevertheless, Google wouldn’t be where it is if it sat on its bottom while others worked. That’s why Google AMP project is up and running for some time now – you can see the documentation and try Google’s solution for yourself by visiting GitHub AMP dedicated page. In this video you can see how fast websites powered by AMP actually are.

This is not the first time big companies such as these are taking interest in improving user experience in similar manner. Bootstrap was created by @mdo and @fat from twitter, with mobile first experience in mind and it really kicked off – 150K websites from the top 1 million are using bootstrap.

People are the main reason page speed is gaining importance. Due to the attention span that is getting lower and lower, most websites that take 3 or more seconds to load cause 40% of visitors to give up on them. The longer it takes for a page to fully display, the higher the bounce rate. Things get even worse on desktop computers.

Conversion rates, purchases, page views and many other metrics that are severely impacted by slow pages are just some of the reasons for you to devote more time and resources into speeding up your website. Just a single second delay in loading a page of your website can cause a 7% decline in conversion and annually nearly $500 billion are lost in the e-commerce trade because of slow websites in the U.S. Whether your site was designed to be slow (was slow to begin with) or it became such with time, there is an abundance of possibilities for you to make it snippy. Just like Barry Allen got his speed force back on the last week’s The Flash episode, so can your website and here are some insights on how to achieve just that.

First step would be to see how your existing website fares regarding the page speed metrics. This is done via either GTmetrix or Google PageSpeed insights. Both tools will crawl website several times in order to capture all the things that are making your website load longer than it should and present you with the results, as well as ways to improve. For example:

Both GTmetrix and Google page speed Insight will not only calculate page speed metrics for your website, but will also give you recommendations on how to improve them. These are important insights for any web design or SEO agency that will be working on your website. Considering that page speed impacts SERPs, SEOs have to work with web designers in order to deliver the best possible user experience (quality content, responsiveness, short loading times, etc.) in combination with high rankings. It is futile to have good user experience if you are far from page one or two in the results and on the other hand, you will see little to no benefits of high ranking if your site hasn’t got anything to offer. 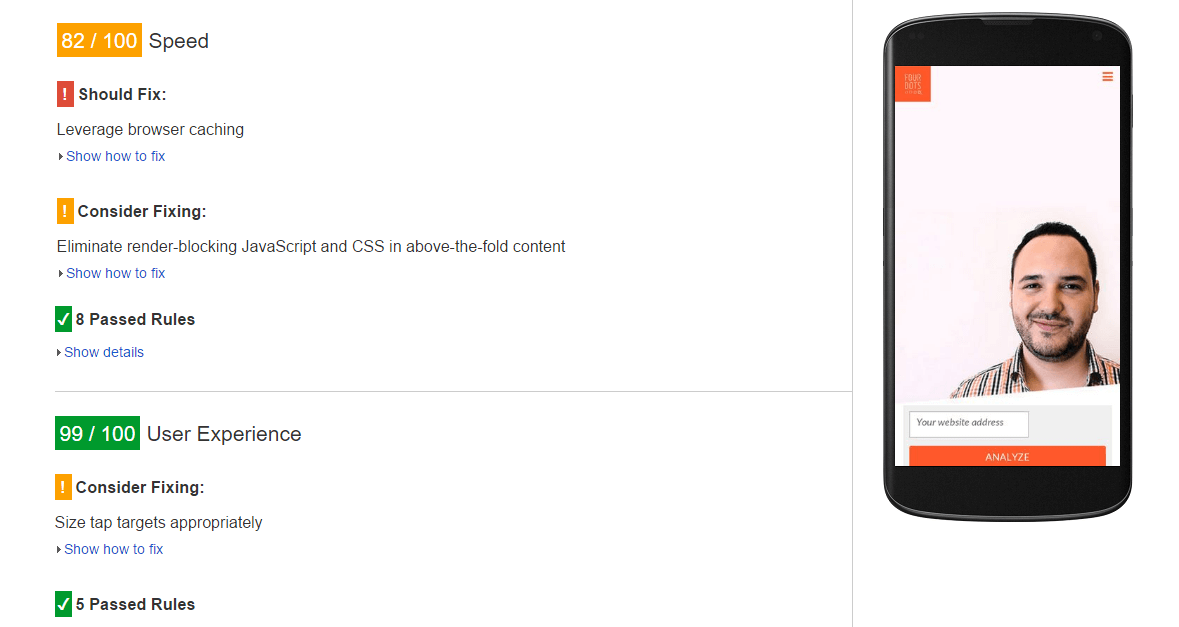 In the words of Jeremy Clarkson, what we need now more than ever is “speeeeeeeed”, because the more media we require (images, videos, gifs, etc.) the more cluttered and slower the web pages will become. Therefore, a balance has to be made between the abundance and quality of your content, while factoring in page speed as well. All of those frameworks from Google, Facebook, Twitter and others can help, but in the end. it is mostly up to you and how much heavy content you cram on your website.